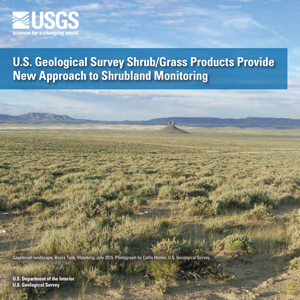 The USGS in collaboration with the Bureau of Land Management has produced historical NLCD shrub products for Western U.S. shrubland areas for every year between 1985-2018. Products are available for six components including shrub, sagebrush, herbaceous, annual herbaceous, litter and bare ground.

The U.S. Geological Survey (USGS) in collaboration with the MRLC consortium has released a new generation of National Land Cover Database (NLCD) products for Alaska. The 2016 Alaska Landcover includes new impervious and developed features across the state as well as updated change information products for all years. Alaska tree canopy products for the state were previously released by the U.S. Forest Service. All land cover, imperviousness and tree canopy products are now available for download here.

A new paper entitled, "Conterminous United States Land Cover Change Patterns 2001-2016 from the 2016 National Land Cover Database," has just been published in the ISPRS Journal of Photogrammetry and Remote Sensing. This paper describes the production and land change results from NLCD 2016 land cover products, and will serve as the primary citation for these products.